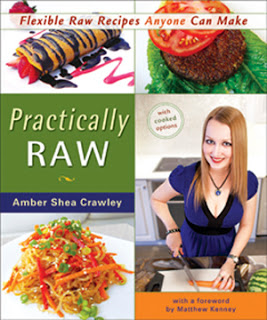 I first became exposed to the benefits of raw foods more than 12 years ago when I attended several raw potlucks that hosted guest speakers such as David Wolfe, Loren Lockman, and many others.
I came away from those experiences realizing two things: 1) I wanted to include more raw foods in my already vegan diet, and 2) I would never go 100% raw because I liked cooked food too much.
Flash forward to present day. When I first read the book proposal for Practically Raw: Flexible Raw Recipes Anyone Can Make, I knew I wanted to publish it.  Amber’s smart new relaxed approach to raw foods that included some cooked meals really spoke to me.
Recently there have been indications that Practically Raw is truly a book whose time has come.  From this article on One Green Planet to this VegNews interview, it’s clear that a more relaxed approach to a raw foods diet is making sense to others as well.
If you like the idea of adding more raw foods to your diet, but want to keep eating a sensible amount of cooked foods as well, then Practically Raw by Amber Shea Crawley is for you.  The book’s official publication date is March 15 but it’s available for pre-order now on Amazon.
With recipes like Almond Butter Sesame Noodles and Vegetable Korma Masala, even a Cooked Foodist like myself can enjoy being Practically Raw.