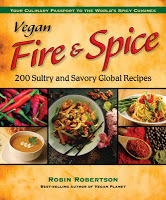 I’m pleased to announce that Vegan Heritage Press recently placed an order for the 8th printing of Robin Robertson’s Vegan Fire & Spice.  Since it was first published in January 2008, the title remains the premiere guide for spicy international vegan cooking.

Organized by global region, the book provides 200 recipes for dishes as diverse as Red-Hot White Bean Chili, Vindaloo Vegetables, Thai Coconut Soup, Penne Arrabiata, and Satays with Ginger Peanut Sauce.  The regions featured include the U.S., Mexico, the Caribbean, Europe, Africa, the Middle East, India, and China.  The recipes were designed to be as spicy as you want them to be, from mildly spiced to nearly incendiary.
If you don’t already have this book, now is a good time to spice up your life (and your vegan cooking repertoire) with a copy of Vegan Fire and Spice.